Millions of children around the world participate in competitive youth sports every year. Involvement in organized sports teaches many essential life skills – teamwork, confidence, the value of hard work, and discipline. While some competitive sports promote activity and a healthy lifestyle, others build skills such as mental agility. The hyper-competitiveness of youth sports raises concerns that children are pushed too hard to win and succeed. The sports options for youth are also evolving, as competitive e-sports emerge. Competitive sports can heighten aggression, pressure to win, and put children – who are still growing and developing – at risk for injuries. In many places, increasing costs of club sport-memberships and insurance exclude those who need social interaction and fitness the most. The costs of maintaining and running facilities can also limit the accessibility for youth. How much should we push young people to participate in competitive sports? Do the benefits of structured competition outweigh the costs of over-competitive behavior and possible injury? How does participation in sports impact the well being of youth and their families?

Traditionally, clothing and accessories have all been developed to fill basic needs. They provide warmth, protection from the elements or injury, and even serve to attract attention. Recently, the industry for wearable technology has transformed the way we think about clothing and accessories. Wearables have rapidly expanded to include heating elements, internet connections, watches, body monitors, and more. As more people grow accustomed to wearables in their daily lives, the possibilities for what the technologies can do are virtually limitless. They already monitor vital signs, send information to medical professionals, and even give individuals the ability to soar like a bird in personal flight suits. Smart sports uniforms can now reduce and identify injuries by regulating body temperature, supporting muscles and tendons, and gauging the force of impact. Attire with virtual reality functions is currently being developed to push this sector even further. How will wearable technology enhance or jeopardize real-life experiences and connections with others? Where in the world could wearable technologies allow humans to survive? What advantages or disadvantages are inherent in the inclusion of technology in our clothing and on our bodies?

Humans have always impacted the environment. Over time, the effects have increased as industrialization, urbanization, deforestation, processing of natural resources, the burning of fossil fuels and more technologies have developed. Examples of human’s impact on the environment are everywhere.

Feeding the world’s growing population has adverse environmental effects such as overgrazing, deforestation, and agriculture-induced soil erosion. Water pollution from pesticides and fertilizers impacts the quality of water available for specific populations. Clearing of land and overfishing result in loss of biodiversity and disturbances to ecosystems. Industrialization and urbanization cause the release of toxic solid, liquid, or gaseous waste materials and are the catalyst for serious environmental hazards. Water pollution as a result of poor disposal of sewage wastes, solid wastes, and other industrial wastes, may spread diseases and create an unfit environment for human activities. Industrialization has also increased consumption of natural resources for the production of goods, leading to a significant loss of nonrenewable resources and excessive waste. Activities like mining and dam construction cause habitat destruction. Trends like “fast fashion” contribute to why the fashion industry is the second-leading cause of pollution in the environment. What are our challenges moving forward to create a balance between basic human needs and our need to preserve or create an environment that is fit for continued quality human existence and growth?

What if your doctor could diagnose you before you experience symptoms? Using information from an individuals’ genetic and molecular profile, researchers have begun to create patient-specific treatments with a level of precision never before seen. Personalized Medicine enables healthcare providers to use a patient’s cells to combat precisely identified diseases at an unprecedented pace.

Researchers at universities, biotech companies, laboratories, and pharmaceutical companies are continually making discoveries. Doctors and other healthcare professionals continue to explore how these discoveries can help patients and increase our knowledge about diseases. The pharmaceutical industry is developing medications that tailored to an individual patient’s genetic makeup. The costs of genetic tests are decreasing as their availability increases. Even with better affordability, how accessible will individualized advanced treatments be? Will insurance companies cover them? The increasing specificity of personal health information raises many concerns about the protection of personal data. How will Personalized Medicine account for the impact of external/environmental factors on an individual’s health?

Terraforming is the process of altering the ecosystem of a region on Earth, Moon, or another planet to make it habitable for people. This may include altering the atmosphere, temperature, surface, or environment.

The Moon, Mars, and Venus have all been considered as candidates for terraforming. What modifications would be needed to make such places suitable for humans? The "worldhouse concept" involves enclosing areas on Earth or even entire planetary bodies under domes. Scientists theorize of geo-engineering the Sahara desert into a lush forest. What unforeseen effects and consequences might these actions create? What other areas might be considered for terraforming?

Most people dream of visiting new and exciting places to experience culture, cuisine, and local entertainment through travel. Transportation technology makes it easier and faster than ever before to get from one country to another although travel can be very expensive and time-consuming for many people. Heightened safety concerns often mean changing security requirements and government screening processes for crossing borders.

Some experts believe that technology may begin to replace in-person travel. VR-AR-MR (Virtual Reality / Augmented Reality / Mixed Reality), are immediate, involving, engaging and immersive types of entertainment that can accessed anywhere in the world. This could cause travel to boom if people, having used these technologies, want to experience the world “for real.” People may be increasingly comfortable in both worlds: the physical real world, and the digital world that is constructed instantly and repeatedly to fit what each person wants and chooses, using immediately responsive networks.

How will the time, technology, and expense associated with travel impact the future of international travel and tourism?

Approximately one-third of our lives is spent sleeping. For nearly a century, scientists have been able to record brain activity and see the dynamic changes during sleep. Lack of sleep can affect brain function, especially memory, language, and emotional balance. Physical effects include fatigue, stress and health problems including heart disease and obesity. Today, technology on our wrists can measure sleep habits and movements.

Globally, businesses developing sleep aids are witnessing significant growth due to the rising incidence of sleep disorders. This has been exacerbated by the growing senior population. It is manifest in increasing demand for sleeping pills due to stressful modern lifestyles and increasing numbers of initiatives by various health organizations to increase awareness about sleep disorders. Sleep medications often have undesirable side effects and patents of major sleep drugs expire. Wakefulness aids, stimulants and prescription drugs such as coffee, energy drinks, benzodiazepines and even illegal drugs are gaining in popularity as a perceived solution to the need to perform effectively despite sleep deprivation.

How might our over-scheduled lives and increased digital presence disrupt natural circadian and sleep patterns? Can the benefits of sleep be replicated? What new technologies might be available to help people monitor and adjust brain wave activity during sleep? Will scientists discover more about the genes that enable functionality with less sleep?

Gamification isn’t just about leisure time digital or other games. Gamification applies the theories of game development that make games so alluring and creates sustained attention. Players and teams win points and rewards by completing designated tasks. Minecraft, for example, has been used by teachers for everything from computer science to social sciences to creative writing. Fitbit and tracking apps on the iWatch are increasingly popular and encourage competition – with yourself or with a group. Gamification helps users focus on tasks that might normally be boring, and the process might be applied to fields such as customer loyalty, education, health, recreation, job training, self-improvement, household chores, fundraising, and activism. Gamification is being used by corporations to make marketing interactive, but it’s also being used to benefit individual health and well-being.

Is there a relationship between gamification and tech addiction? How might gamification impact education and learning, inside and outside formal schools, or even in the workplace? What are some of the ethical implications, particularly around user privacy? What role will companies have in the creation of tech products to “hook” their users or the use of gamification as an educational tool? Can gamification enhance human interactions?

Across the globe, many people struggle to have and sustain basic needs such as food, clean water, basic medical supplies, and adequate shelter. Some people are forced to leave their homes to travel to other places or countries to find menial work to send money home to support their families. Due to poverty, many people are unable to access education. Some adults deliberately suffer from malnutrition so that their children can have the food that is available. Children in severe poverty are often orphaned or they have been sent away because their parents cannot afford to care for them. Healthy food can be very difficult to come by for the poor due to lack of financial and monetary resources, meaning that they depend on cheap, unhealthy foods to sustain their lives.

What can be done globally to assist those suffering from extreme poverty? How can we reverse this trend in order to decrease the adverse impact of poverty on future generations?

From woolly mammoths to saber-tooth cats, to passenger pigeons and dodos, to a myriad of insects and invertebrates, many species have become extinct over time. New scientific advancements are leading to unprecedented uses of fossilized materials. Could these archaeological discoveries combined with scientific breakthroughs lead to the long awaited, long speculated, realization of de- extinction? De-extinction, also called resurrection biology, is the process of resurrecting species that have died out, or gone extinct. De-extinction uses techniques such as cloning to revive an extinct species. De-extinction is a controversial proposition that has split scientists.

Technology to revive extinct species is close to being perfected, but does this mean that it should actually be used? Where will these revived species be housed and what impact will they have on an already changed habitat? What are the ethical pros and cons of reintroducing extinct animals? What limits should be placed on the use of such technology? Should scientists use this to undo environmental harm that has occurred? How might these restored species affect our current biosphere? How might living among de-extinct species affect humanity?

The topics for Future Problem Solving Program in 2018 were

The topics for Future Problem Solving Program in 2017 were

The topics for Future Problem Solving Program in 2016 were

The topics for the Future Problem Solving Program in 2015 were 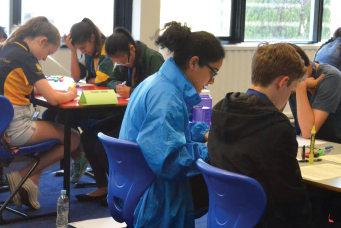